Swiftships Shipbuilders, LLC had the great honor to host a visit by the Commander Naval Sea Systems Command, Vice Admiral Kevin McCoy. Vice Admiral McCoy was briefed on the progress of both the Iraqi and Egyptian projects currently underway at the shipyard and additional contract with awards in progress or from other contracting agencies. The Naval Sea Systems Command (NAVSEA) oversees all naval shipbuilding programs in the U.S. and is the Navy’s main engineering and support organization for surface and submarine vessels.

“This is the highest ranking Navy official we’ve ever had visit us here in Morgan City Louisiana,” said Calvin Leleux, President of Swiftships, who has been with the company for over 40 years.

In September, Swiftships was awarded a NAVSEA FMS case contract to rebuild the Iraqi Navy by constructing 35 meter patrol boats.  Currently the contract includes 9 patrol boats, with 6 more be awarded later. The contract will also include spare parts and special tooling.

In addition to the new construction program, Swiftships was awarded a contract to train Iraqi sailors to operate and maintain the boats. The training is set to begin in April with 50 Iraqi students, the first of several groups of trainees to be trained in Swiftships’ on-site training village in Morgan City.

“The work you are doing here is very important to our country,” said Vice Admiral McCoy discussing the Iraqi patrol boat program.

Eight-five percent of the country’s oil, its biggest export, flows through one platform in the Persian Gulf. Currently, the US Navy maintains a presence there to protect these vitally important Iraqi national assets.  Once the Iraqi Navy has the Swiftships’ patrol boats on station with trained crews, the Iraqis will have the tools to protect the Iraqi oil platforms themselves.

The Vice Admiral also toured the “training village” being constructed under a Naval Air Systems Command, (NAVAIR) contract to support the Iraqi trainees.

“One thing I’m taking away from this visit is how well Swiftships is treating their foreign guests,” Vice Admiral McCoy said on Monday.

As scheduled, Monday, 15 March 2010, Swiftships’ Hull 601, the first Iraqi patrol boat in construction started its main engines for the first time. As all shipbuilders know this is a major milestone in the birth of a new combatant boat.

Also present from the Navy for this high level visit were: 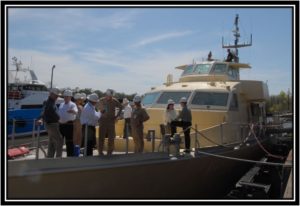