New Delhi – Jan 27th, 2015 President Obama wrapped up his historic and successful three-day trip to India making him the first ever President to visit twice as a sitting President. The President cut his trip short to visit Saudi Arabia and offer condolences to the new Saudi King Salman Bin Abdul Aziz on the death of his brother King Abdullah Bin Abdul Aziz.

“These three days have been full of excitement and it is truly an honor for me to be back in India with the President on this historic occasion. We are looking forward to many more visits from the business group that have participated on this trip to build real business activities and take the trade between the two great nations to the next level. The potential is enormous, said Hassan.

PM Modi and President Obama hammered out several agreements, which include partnerships on Nuclear and Green Energy initiatives. The two respected officials spoke jointly to business leaders from both countries at a CEO roundtable on MondayJan 26th. At this meeting, President Obama pledged $4 Billion in investments and loans to focus on the “untapped potential” of the host country.

Both leaders realize that even though United States is the India’s largest trading partner, the size of trade in comparative potential is minimal, so there is a strong desire to substantially expand the trade on both side of the aisle in the coming months and years.

Analysts predict that the economic momentum has now sparked and that exciting times for both nations lie ahead. 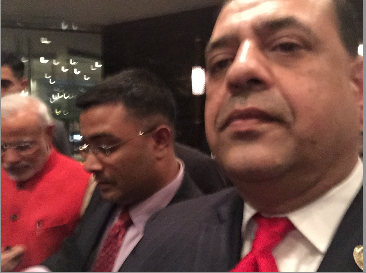 Lutfi Hassan and PM. Modi after CEO Round Table.